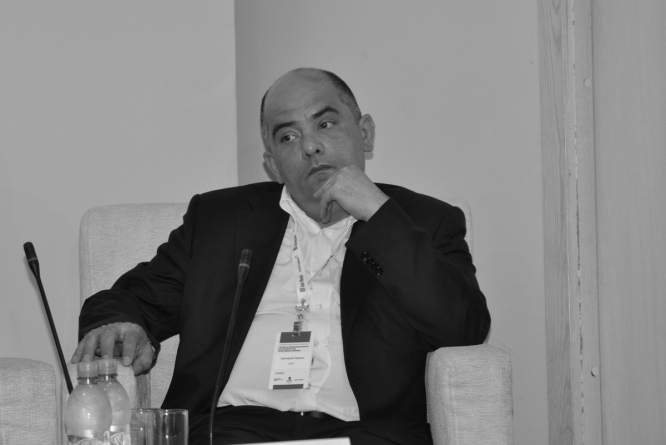 Architecture critic and KB Strelka partner Grigory Revzin visited the new Zaryadye Park and shared his impressions on his Facebook page. We present his comments unchanged.

It is a wonderful creation. It would be one of the best modern parks in the world, with good reason. The concept of a modern park is based on the opposition game: artificial-natural and real-virtual; everything there is built on this basic principle. Wildlife in the center of a metropolis cannot occur naturally; it is an exhibit, with its every component being created artificially. The glass crust laid over the mountain is the perfect expression of this thesis. Every piece of nature that is there proves to be an exhibit; and when you come closer to it, it looks like an ecological installation. And when you see the city through it — Saint Basil’s Cathedral, Red Square, Kitay-Gorod — it turns into a real nature, which makes open views look strange. Birch wood — through which you can see Saint Basil’s Cathedral — is a very precise striking image that seems to be created not by reality, but by computer editing. The ‘floating bridge’ is a gesture, just a very strong gesture, and since we are not used to gestures at all (neither for money, not for profit, but just because of joy of life), it is flabbergasting. When you’re standing on it, you can feel how huge the river is, how much space there is, how big the Kremlin is — it is such a strong feeling, and it’s silly to call it a selfie-bridge; this place is not meant for taking selfies — there you need to experience the freedom of space. The access to the Moskva River through an artificial lake, floating bridge and the lower embankment is the solution of the task that no one could cope with since the times of construction of Stalinist granite embankment. All these structures have been done masterfully and cannot but cause professional pleasure or spiteful jealousy depending on the essence of the professional’s soul. Sergey Kuznetsov, who managed to stand up to all this — and I can imagine how many times he had been advised to abandon the Americans’ project and take up our Russian project, to abandon the bridge, because the Kremlin could be seen from there and who knows what else would be seen, to abandon the glass dome, because it does not have a clear function, etc. — he is a real hero who made an amazing work! I’ve had to deal with so many state projects and, in my opinion, their main problem is that they have no individuality, there is no person who lives and breathes his work, therefore the most mediocre and dull solution always wins. This project had a strong personality who made strong decisions and their brightness, in some way, surpasses the building quality.

The situation in the park is absurd because of obsession with safety. If it were not for the fence around the park (which makes it look like an uncleared construction site), the entrance wouldn’t be so much overcrowded. In the center of the park, there is no such problem. Nowadays people in uniform have lost sense of normalcy, as any crowd of people means an emergency situation for them. Surprisingly, but they have not fenced and installed metal detectors in the area of ​​three stations or Pushkinskaya — it is not less crowded than Zaryadye Park, but somehow everyone got used to it, but here we have new place opened. And they are off the chain with their safety. There are body scanners at the entrance and in each pavilion, security is on the bridge and at the exit — isn’t that crazy? How do they move around the streets with such passion to guard everything? There you might come across townspeople who are not on a leash and without a muzzle! The whole point of the concept is that the city gradually integrates into the park, there are dozen entrances there; the idea is that you walk around the city and suddenly find yourself in an incredible place — in the tundra, say, with the Kremlin in the background; rather than queue to be frisked, and then, singing to yourself, “The Cheka surrounded us, „Hands up!„ they shout“ while walking on the tundra.

I read a lot of criticism about the park and saw the park for myself. I must say that criticism has nothing to do with the park, but only with the critics’ complexes. Someone said that old views of Zaryadye have been lost, but these views were lost half a century ago, when the hotel was built there. Conservators propose to restore them, and I just pictured how the restored Jewish quarter might look like — somewhat like the restored Kitay-gorod wall behind Karl Marx Monument. Someone suggested building something new, but in the Russian style — which is, after all, quite marginal. Someone said that the architecture of the park is outdated — but I do not understand what it means, I do not see any alternatives in the sense of the language. Someone asserts that everything turned out to be terribly provincial — I think this statement is akin to when they say that the new Mercedes looks ‘terribly provincial’ in our streets. Others say that this is not a park, but a museum; and if it were a park, it would be much better — but they completely forget that the idea of ​​a park-museum (a botanical garden) is 200 years old already and they simply lack the basic knowledge. I do not mean that all of this is weak in the intellectual sense — there’s just nothing to argue about. I mean, I have not found an alternative to what has been done, an alternative that I would like to see, not even instead of it, but regardless of what has been realized. And here I wanted this project to be implemented. And it has been implemented.

I can say that in my career as an architectural critic, I have always refused to look at the architectural works if they are not finished, although their authors claim that „everything is already visible“. Usually this means that the work is sure to be continued during two or three months, or even more. So, Zaryadye is just an unfinished, incomplete, and half-constructed project. I do not know who made the decision to open the park without the works finished, but they are not completed. Planting, benches, Philharmonic hall, the cafe on the lower embankment, the ice cave, the glass dome, paving, and lighting, etc. — have remained a work in progress. That is not the point that the plants did not grow well, that any park is such a thing which is necessary to be maintained constantly, so that it will grow out — this is all true, but, that’s not what this is really about. The park was delivered unfinished or not delivered at all — I cannot remember a single object that was put into operation in such condition. It is meaningless to criticize the quality of work in this situation — only the bridge is completed. I do not understand how they decided to open the park — I would not have done it if I were in their shoes. I also do not understand why they do not talk about it. Not about certain shortcomings, but about the fact that this object simply has not been completed.