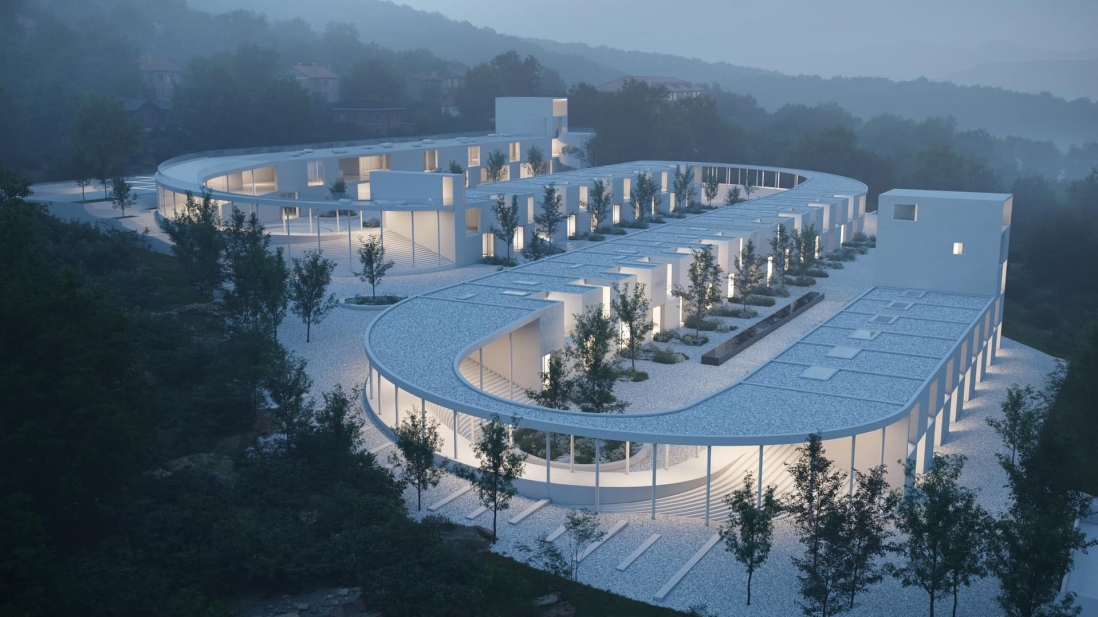 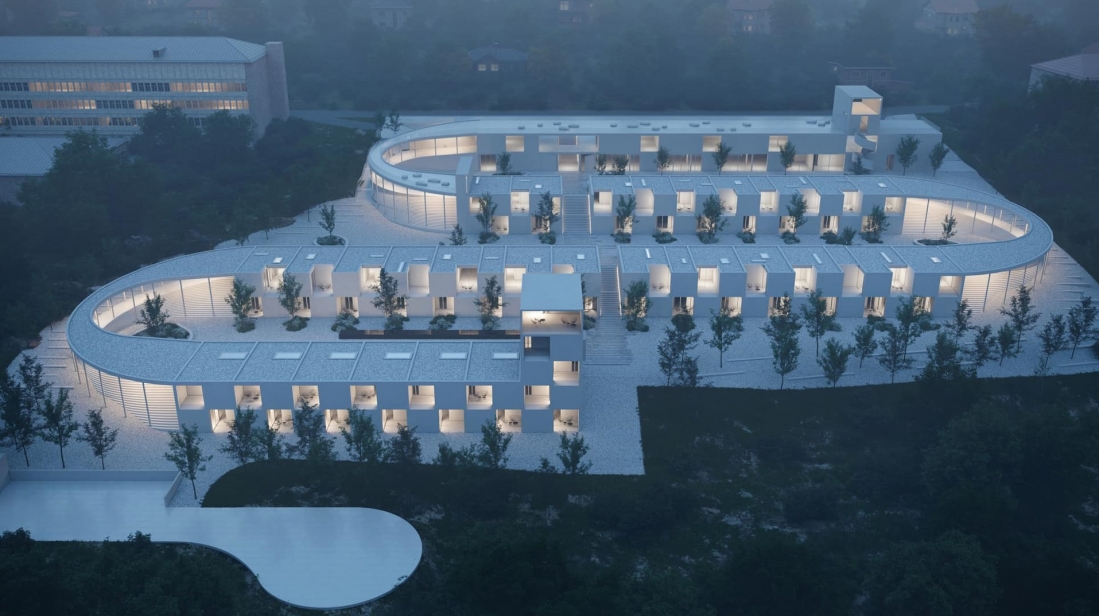 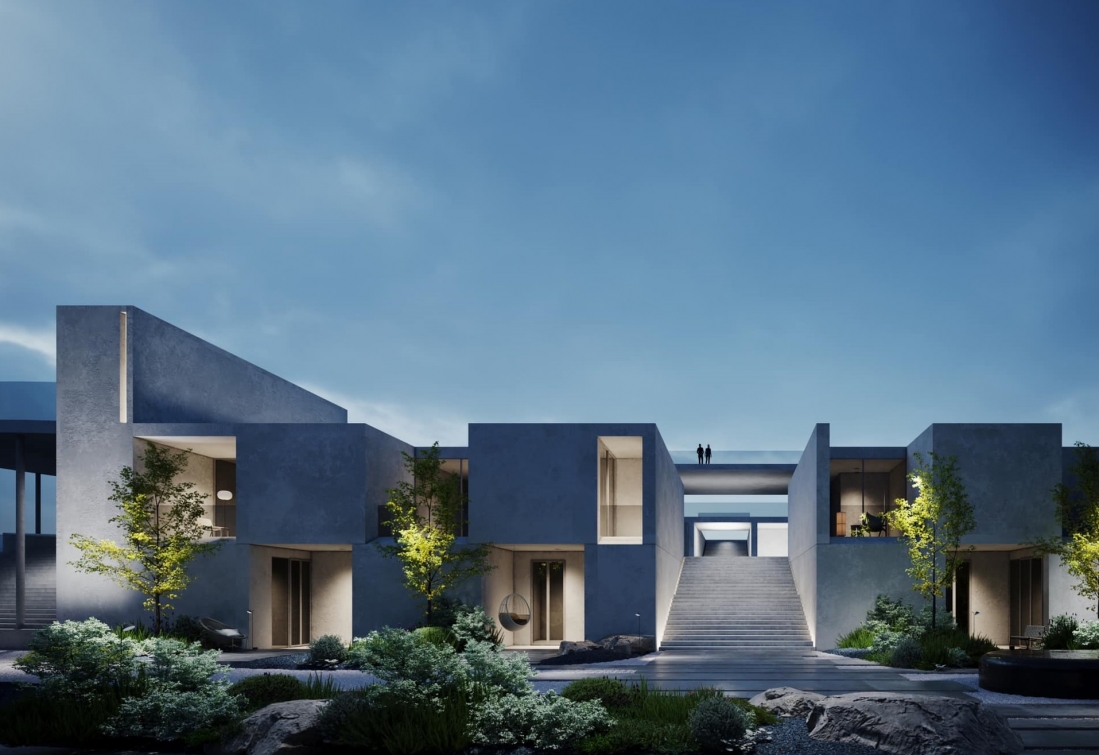 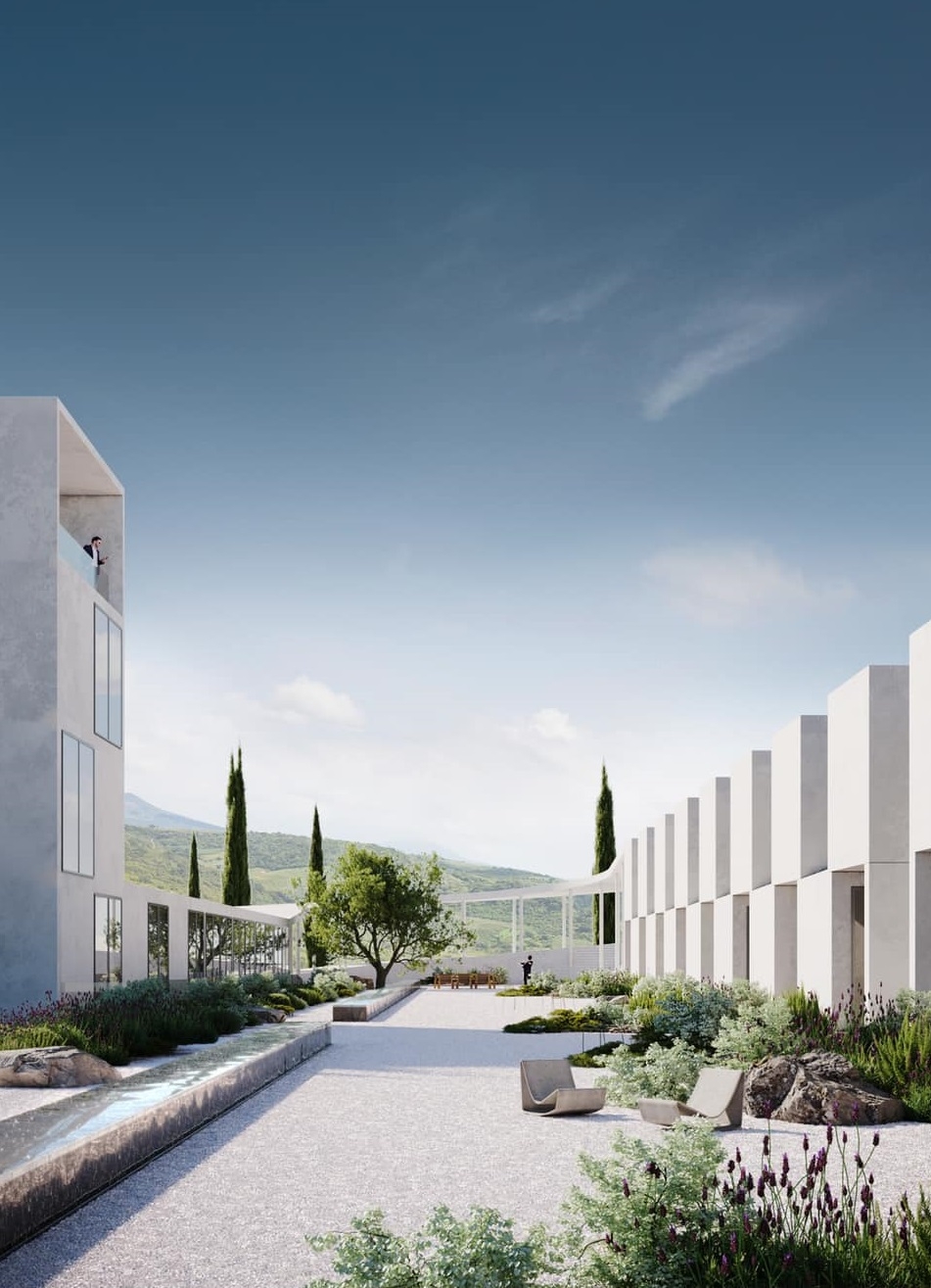 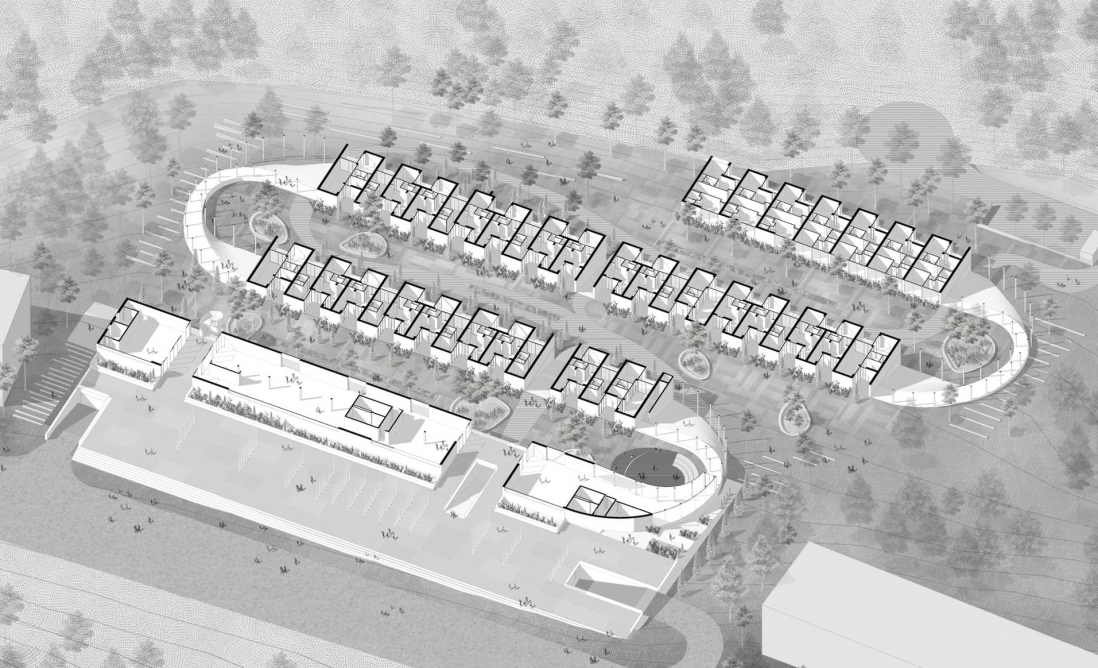 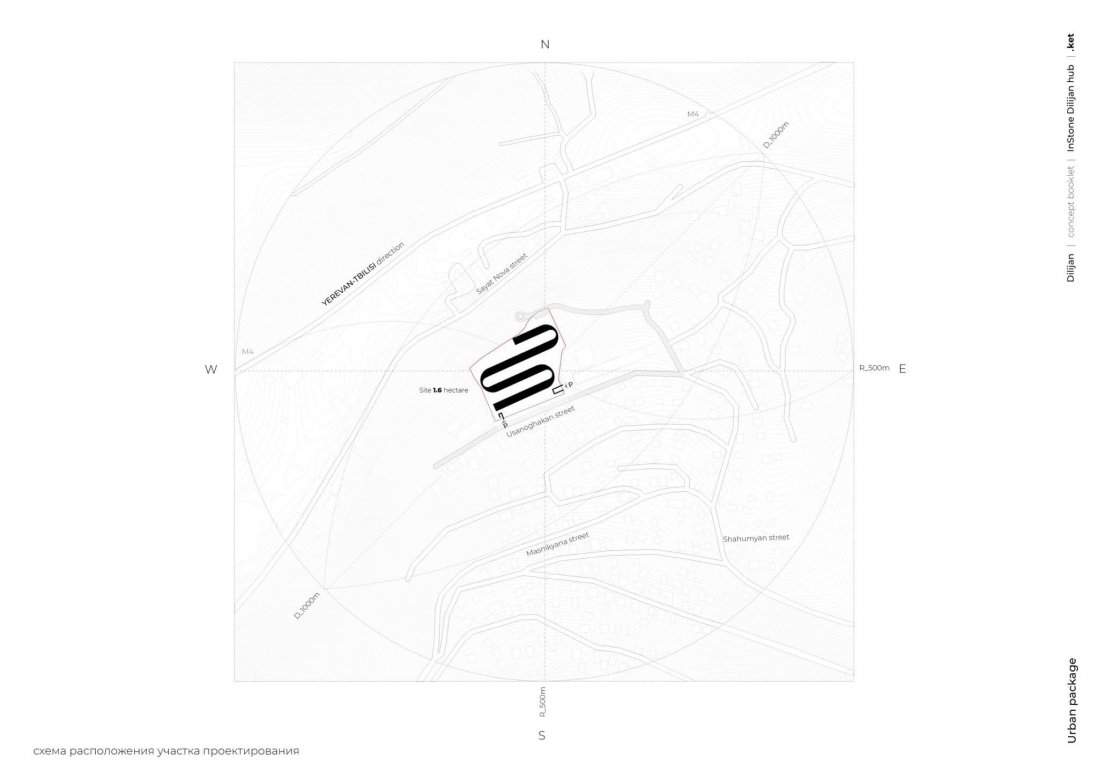 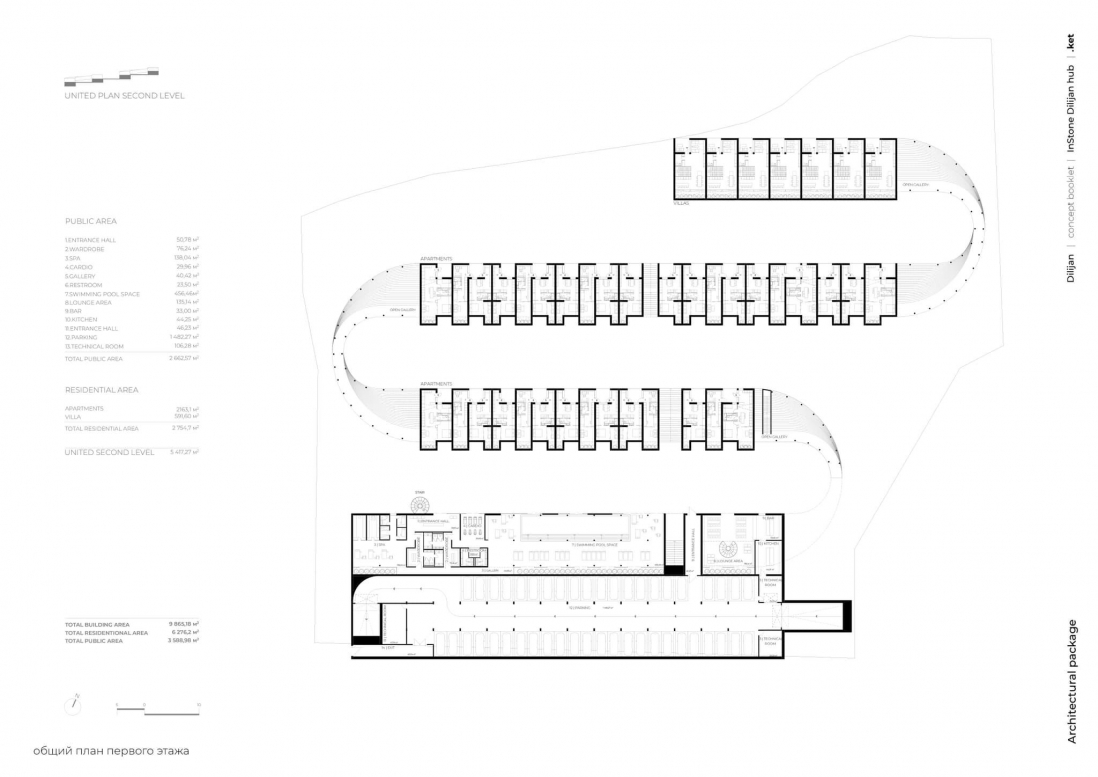 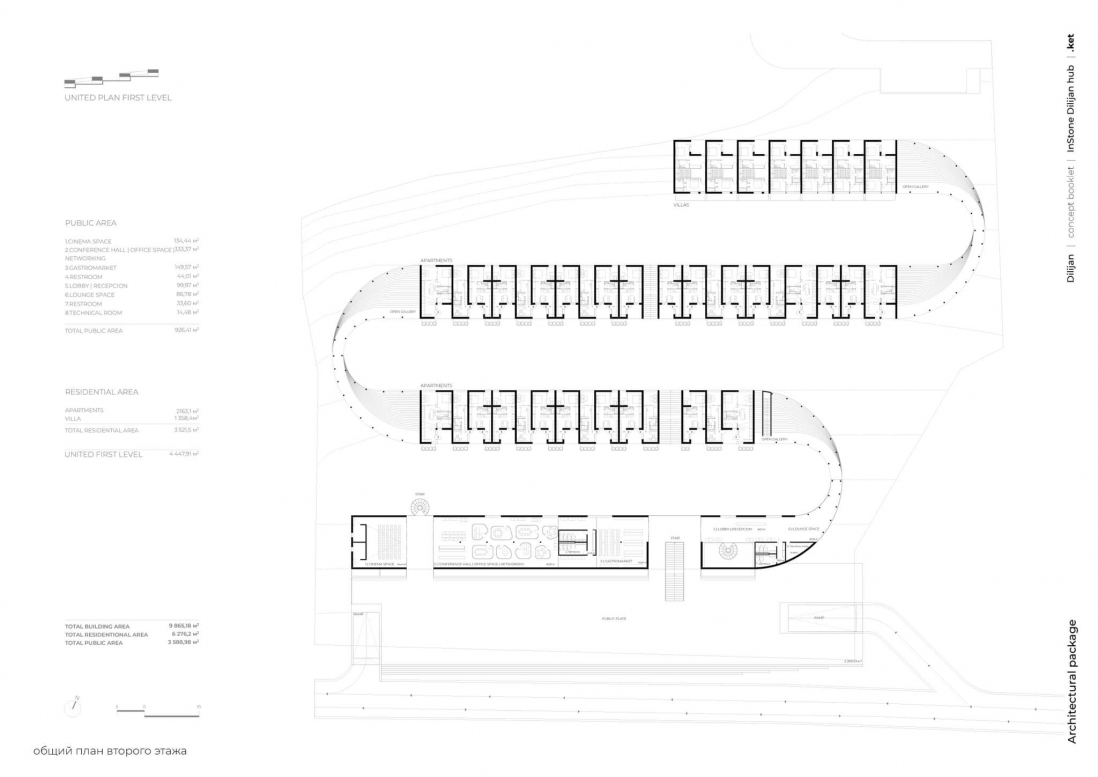 The .ket bureau presented a project of an apart-hotel in one of the most touristic cities in Armenia. In addition to developing tourism, architects are pursuing more ambitious goals — to create a new regional center where IT business activity will develop.

The complex with an area of 9600 sq. m will be erected in the city of Dilijan (1.5 hours’ drive from Yerevan), located in the northeastern part of the Armenian Highlands, on the territory of the reserve with the same name.

«The place is unique and widely known for its mountain climatic and balneological resorts, as well as for its mesmerizing views, which in Soviet times attracted representatives of the creative intelligentsia: artists, writers, actors and directors. The construction of a large-scale architectural object of this level in a once popular place will not only return the former attractiveness of the area, but also contribute to solving the problem of decentralizing large cities in accordance with the global trend» — says one of the project’s authors Karen Navoi Bilyan.

The project called Dilijan Instone Hub is a fusion of public and residential spaces; it takes on the function of rethinking and organizing a new high-quality urban environment. Thanks to this, the complex has the potential to become a new symbol of the city, a magnet and an impetus for the development of regional tourism. To achieve this goal, at the initial stage, the bureau was faced with the task of finding a unique DNA code and morphotype of the environment, which set the parameters for the contextual architectural and landscape solutions of the object.

«The final concept of the project did not come to us immediately, because we decided to consider a wide variety of scenarios for the development of the territory by means of plastic forms. We aimed to generate a completely diverse geometry based on the historical, geographical and national characteristics of the environment. Thus, we got seven contrasting scenarios for the development of space, which were formed due to a certain geometry. For us, the process of searching for the „spirit of the place“ (genius loci) is always on a par with analytics. It is important to fully immerse yourself in the atmosphere of the project. This is a sensory process, so it was symbolic for us to name each concept by a female name that is widespread in this area, which gives a certain association with the shape of the object» — explained Karen Navoi Bilyan.

As a result, the complex took the form of a serpentine road symbolizing the journey. The journey is the movement of life, with its ups and downs. The journey is a river bed and its course, which somewhere dies down, and somewhere runs in a stormy stream. The journey is a transition from the natural environment to the urban one (the main function inherent in this project). The national identity can also be traced in the bends, starting from the curved letters of the Armenian alphabet, ending with narrow arched windows in ancient monasteries. The architects combined all this into a pattern that was literally imprinted in the physical form of the object.

The construction site is located between private residential buildings and a natural park, and in addition has a height difference of 15 meters. Therefore, one of the main tasks that the architects set themselves was to design the apartment complex in such a way as to integrate the object into the environment as delicately as possible, without disturbing the usual viewpoints of private buildings, from where beautiful views of the mountains open.

Public spaces overlook the hub square and work for the city, while residential spaces are drowned on the planes of four buildings arranged on a hill. The buildings are interconnected by half-open and open galleries, staircases, ramps. Their functions, like the urban environment, change with a gradient depending on how far the slope goes down.

«The task of paramount importance consisted in the technical solution of the issue, i.e. how exactly to structure and position the shape of an object on a blanket of relief with a height difference of 15 meters, without disturbing the natural landscape and preserving the integrity of the structure. We deliberately did not increase the number of storeys in the first building, so that the complex would not be discordant with the surrounding buildings and would not overlap the unique natural views with its architecture, but at the same time, an overview of the natural beauties of the area would open from the apartments of the complex. The next three buildings already have a two-story terraced structure, where on one side we see two floors, and on the other side (towards the increase in height) the first floor is buried in rock, creating uniquely beautiful patios with penetrating outside light. Thanks to such techniques, a complete integration of artificial matter into natural matter is created, where one becomes a continuation of the other, giving rise to a new harmonious environment» — the architect said.

The functions of the buildings, like the urban environment, are transformed depending on the height difference. The part of the complex, located along the street, is a large-scale public area, which will become one of the most important points for holding city events. There will be a dry fountain and an extended bench on the square, as well as an info point for the local community.

The first building, located near the public area, meets key social needs and presents a wide pool of services — retail, cinema, gastro-market, networking. Next is the city cafe and lobby, giving rise to the apart-complex. The underground level of the first complex has a parking lot, a spa center with a swimming pool and a lounge area.

«The city of Dilijan is now very actively developing and is becoming a kind of new center of attraction for many international companies in the IT segment. The public part of the hotel, namely the first building, which is focused directly on the urban environment, offers flexible office space and conference rooms. It is a kind of co-working and co-living format for international companies that may be located there» — explained Karen Navoi Bilyan.

In the next two buildings, apartments of three types are presented — S, M, L — in accordance with the capacity, the desired level of comfort and the budget of the guests. The last building consists of a series of villas that can accommodate numerous families or companies. The highlight of this area will be the tower villa, which offers a unique view of the gorge.

The project emphasizes the connection with nature, since each apartment is made in the form of rhythmic stone blocks and has a separate entrance with its own individual entero patio. Individual green courtyards and open cascading galleries are united by a continuous serpentine promenade that leads to the city park with its cycle paths and walking trails. But at the same time, the criterion of privacy and security of each separate apartment zone is preserved. The complex is designed in such a way that the zones of interests of residents and guests do not overlap, providing maximum comfort for everyone.