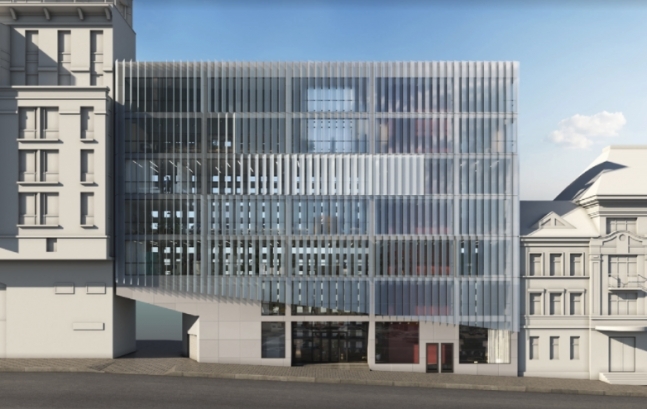 Moskomarchitektura agreed on the architectural and urban planning solution for the business-administration complex in Krasnoselsky district designed by Ostozhenka Architectural Bureau, as reported by Chief Architect of Moscow Sergey Kuznetsov.

The administrative centre at Myasnitsky Proezd, vl. 3/26, bldg. 2 is to be located near Krasnye Vorota Metro station in the frontage of the housing of Sadovaya-Spasskaya Street. It will also provide an accessway to the courtyard and two-level underground mechanized parking for 12 cars.

«The new building is not going to become another full-featured house between the two existing ones; it can hardly perform such function having a width of about 7 meters. It would rather serve as a screen located between the administrative buildings on Sadovaya-Spasskaya Street and the sidewalk. The project developers presented lots of design solutions for facades at the Archcouncil meeting, and the experts came to conclusion that in this case a „unique building“ is the most appropriate as a piece of design which won’t spoil the architectural dialogue with its neighbors, but become an independent structure against the existing background. Previously, the project also was approved by the Urban Planning and Land Commission headed by Moscow Mayor Sergey Sobyanin,» said Sergey Kuznetsov.

The architects proposed to use natural stone and stained glass for facade decoration. «At night the illuminated facades will look transparent which will add a light tone to the street image. The wall overlooking the courtyard will be finely perforated having lots of windows with a size of 70×70 cm. This will make the wall less transparent, more like a pergola, so that office workers feel comfortable. While the external facade overlooking Sadovaya-Spasskaya Street will have a decorative screen with glass lamellas,» said the Chief Architect.

The building is to have six floors and an attic, as well as two underground levels. On the ground floor, there will be typical for business center facilities: lobby, reception, elevator halls, and an area having commercial functions. The office space will be located from the first to the fourth floors; a conference hall and meeting rooms will be on the fifths floor. All premises of the business centre are provided with barrier-free access for people with limited mobility.