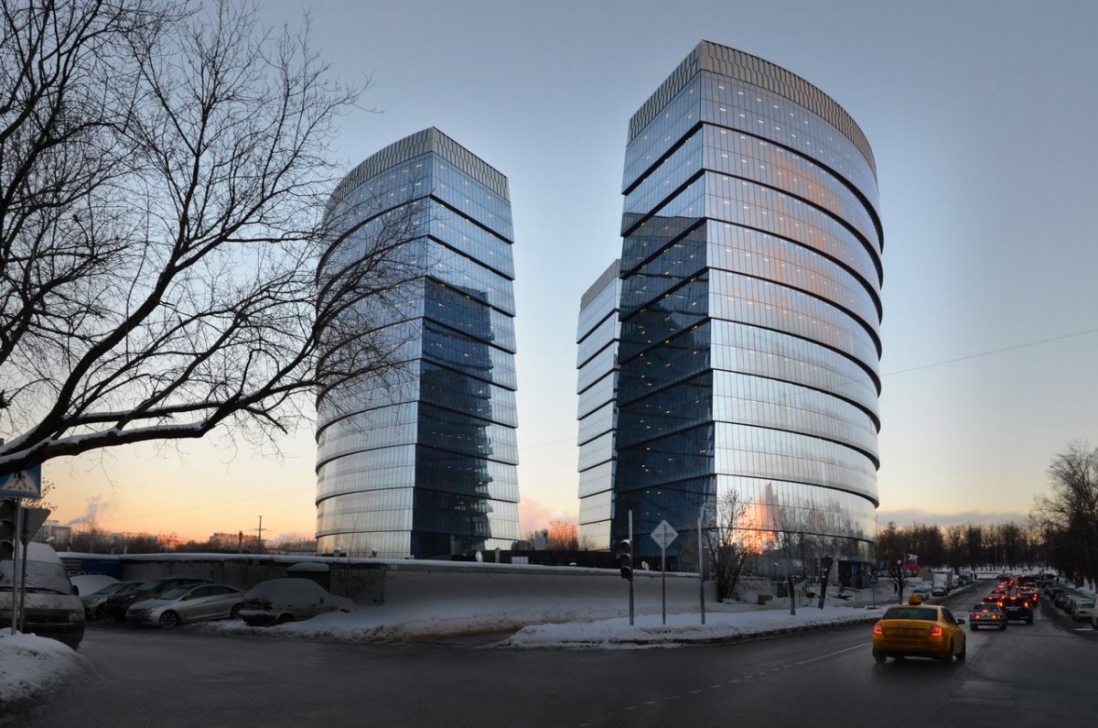 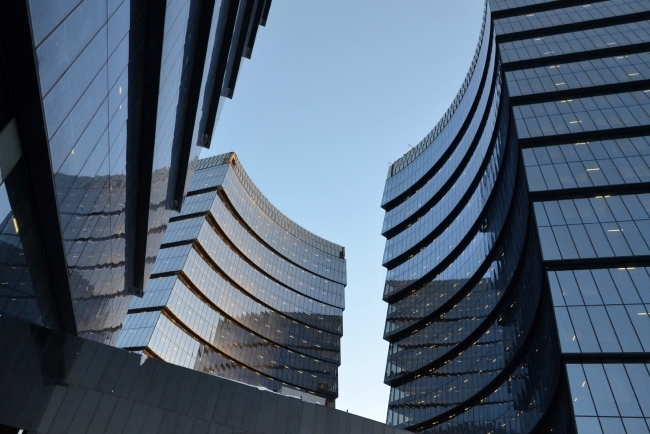 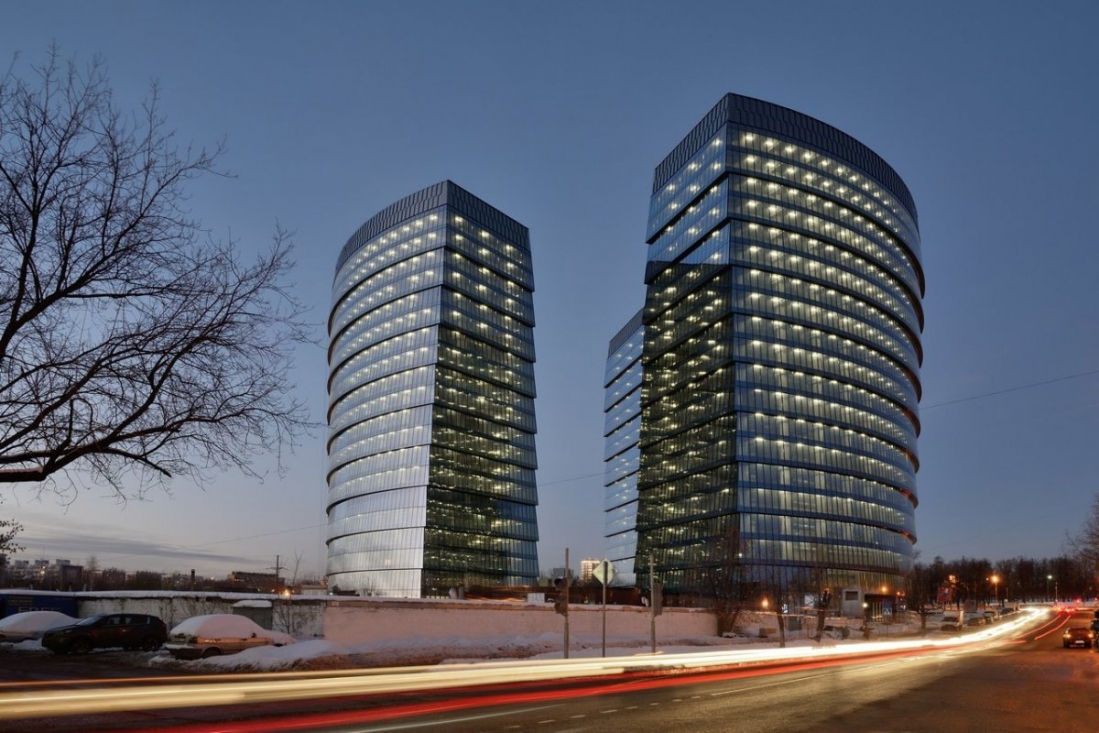 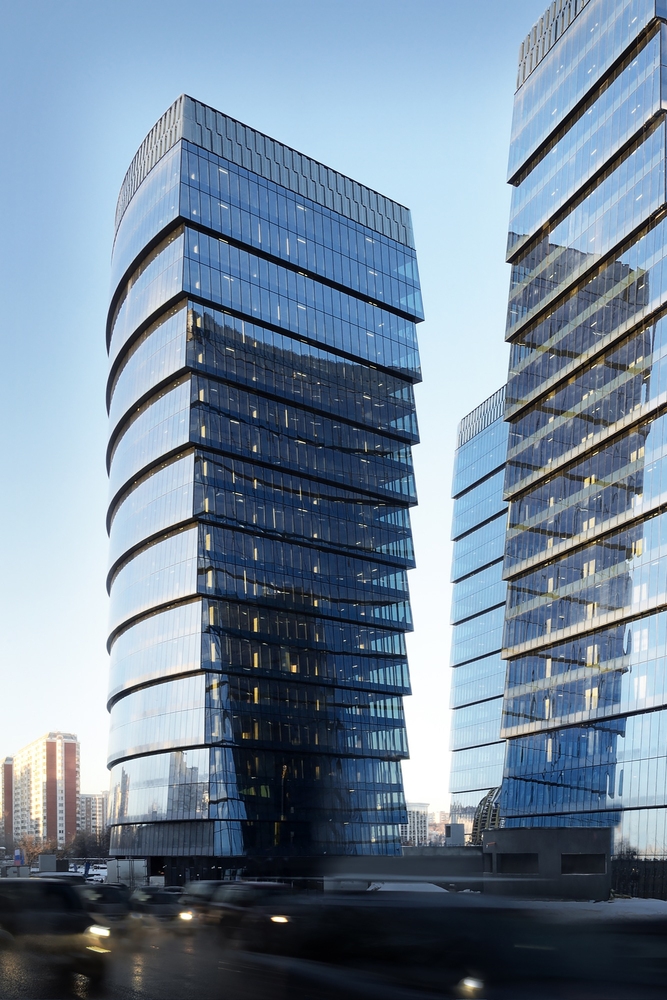 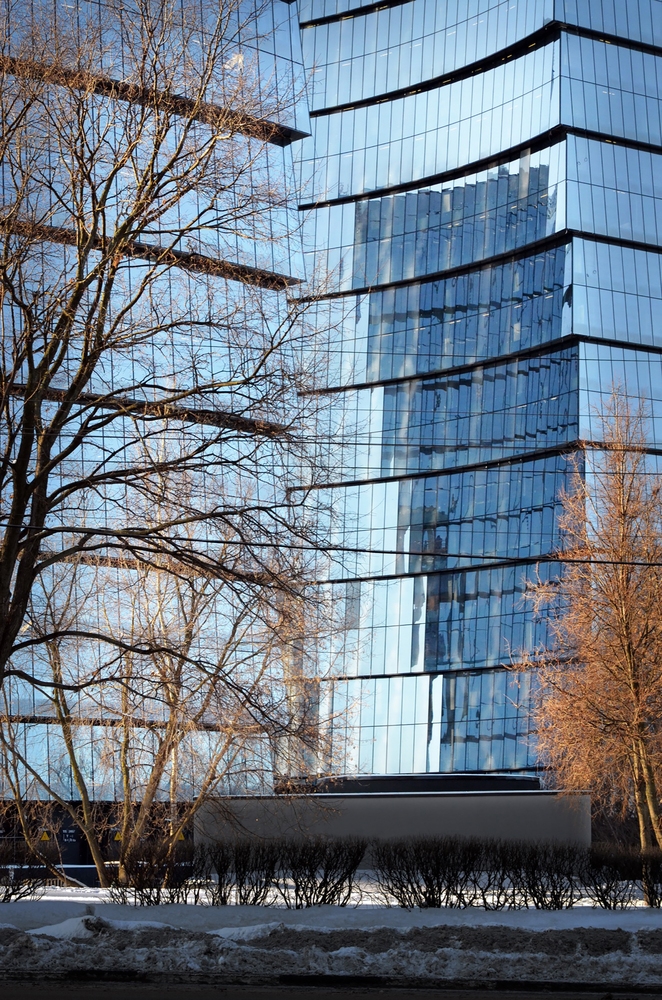 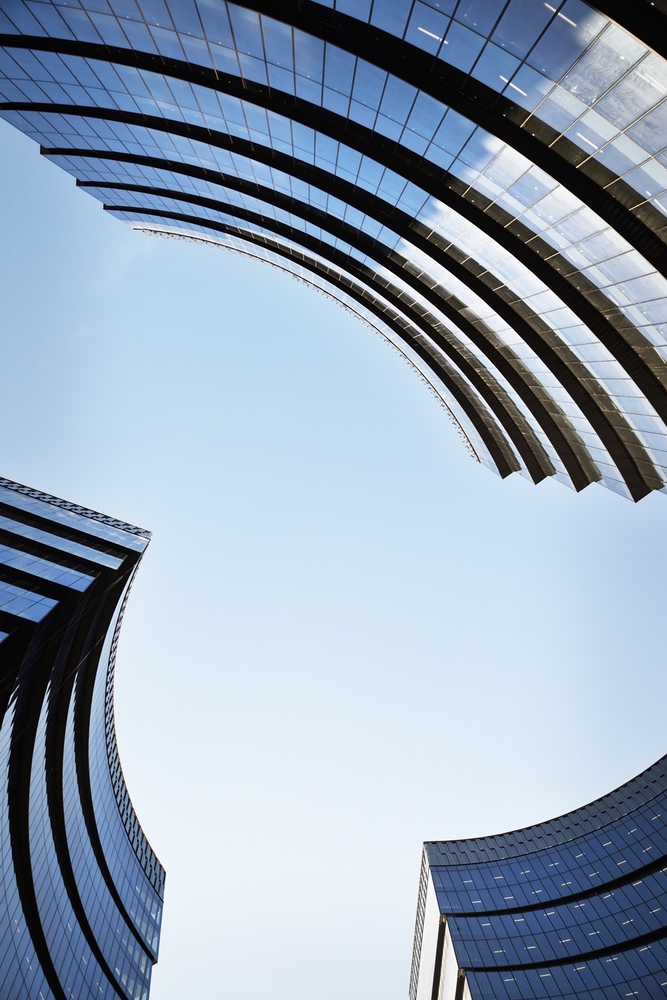 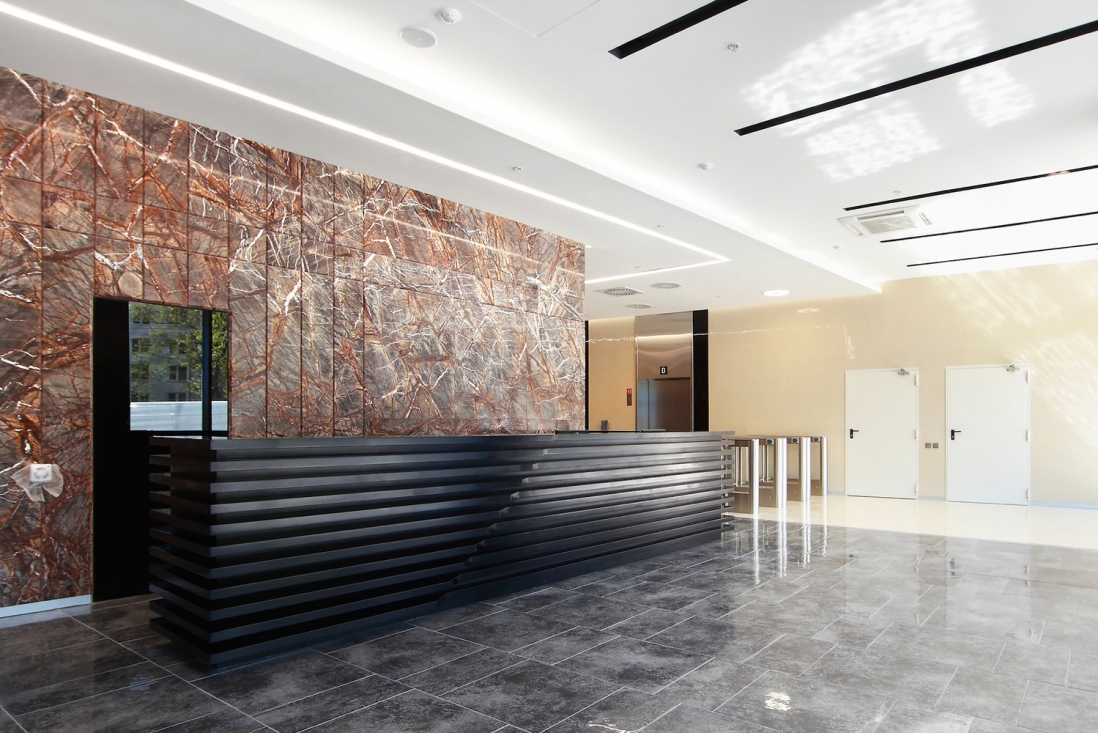 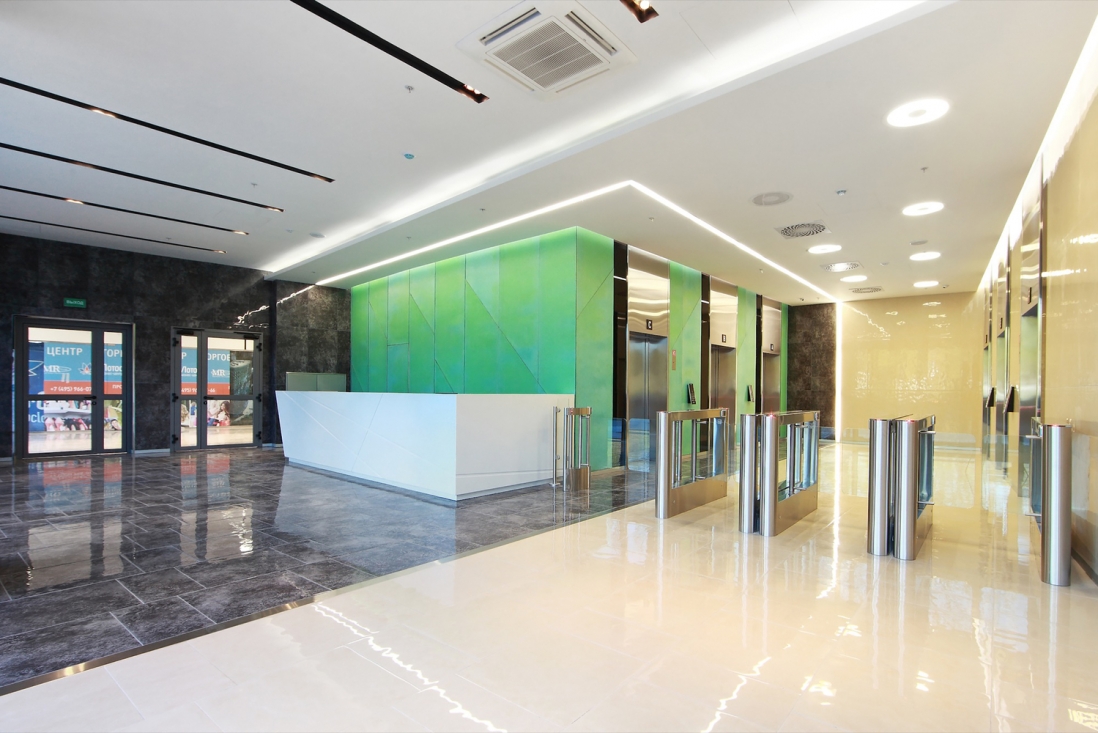 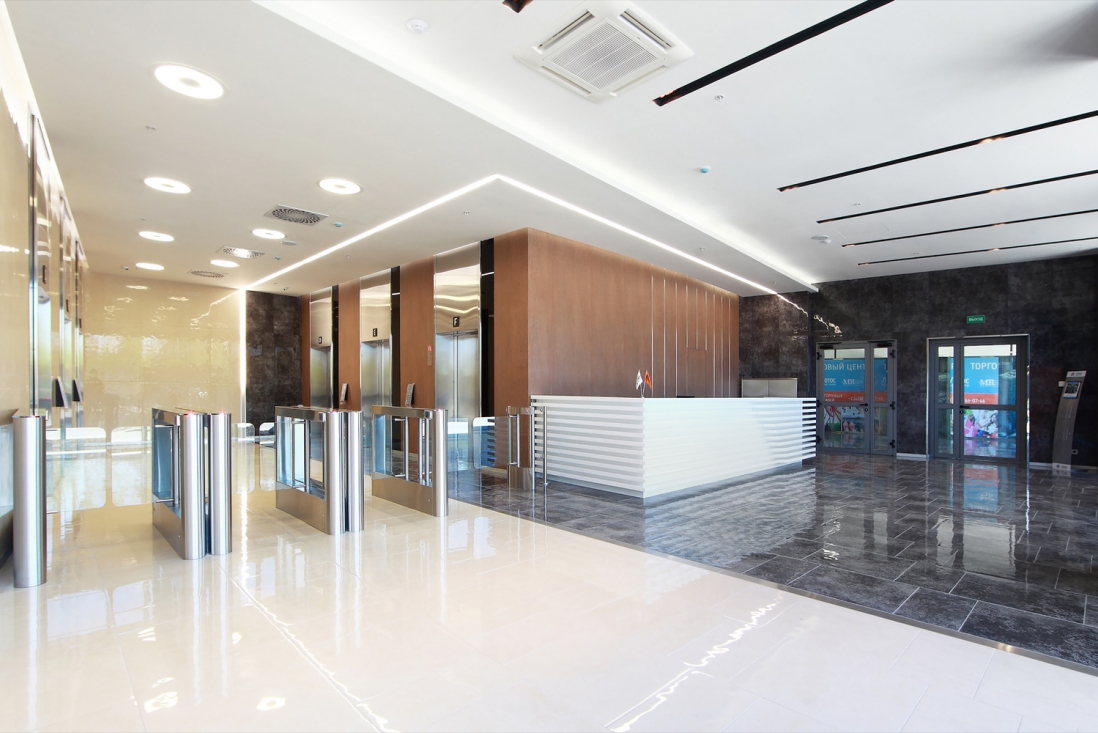 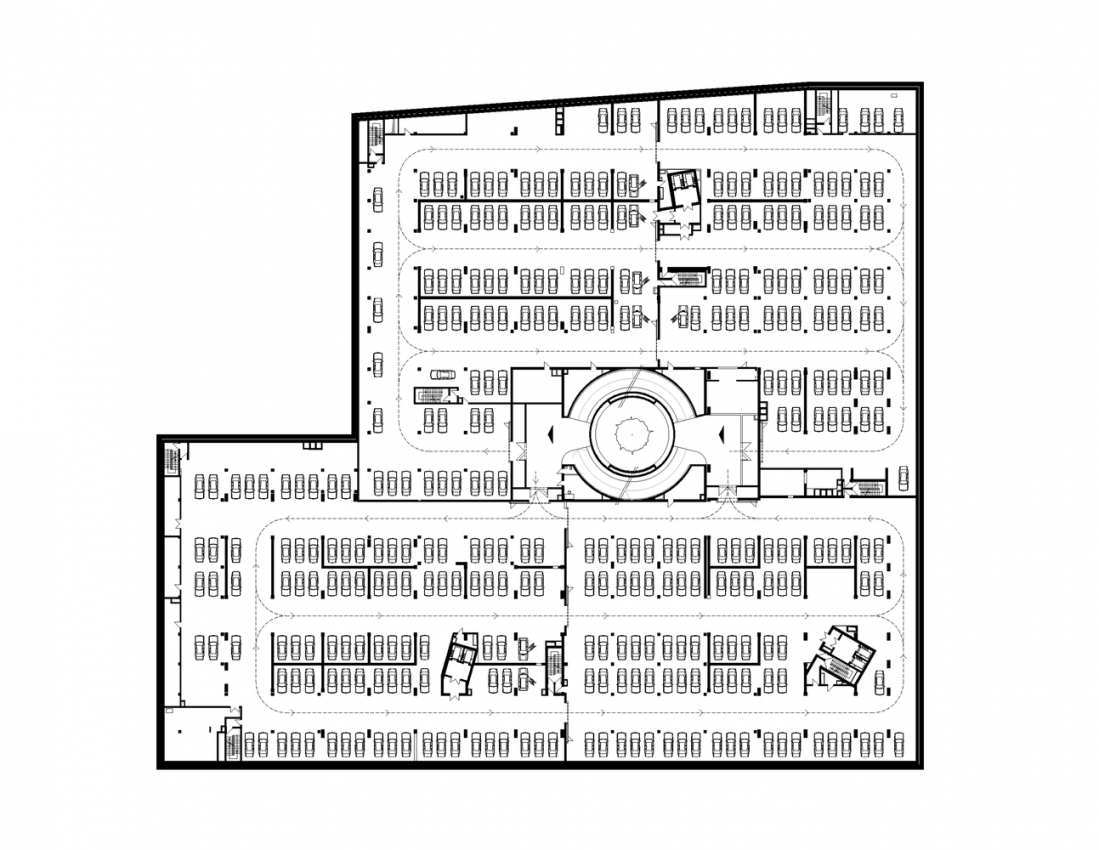 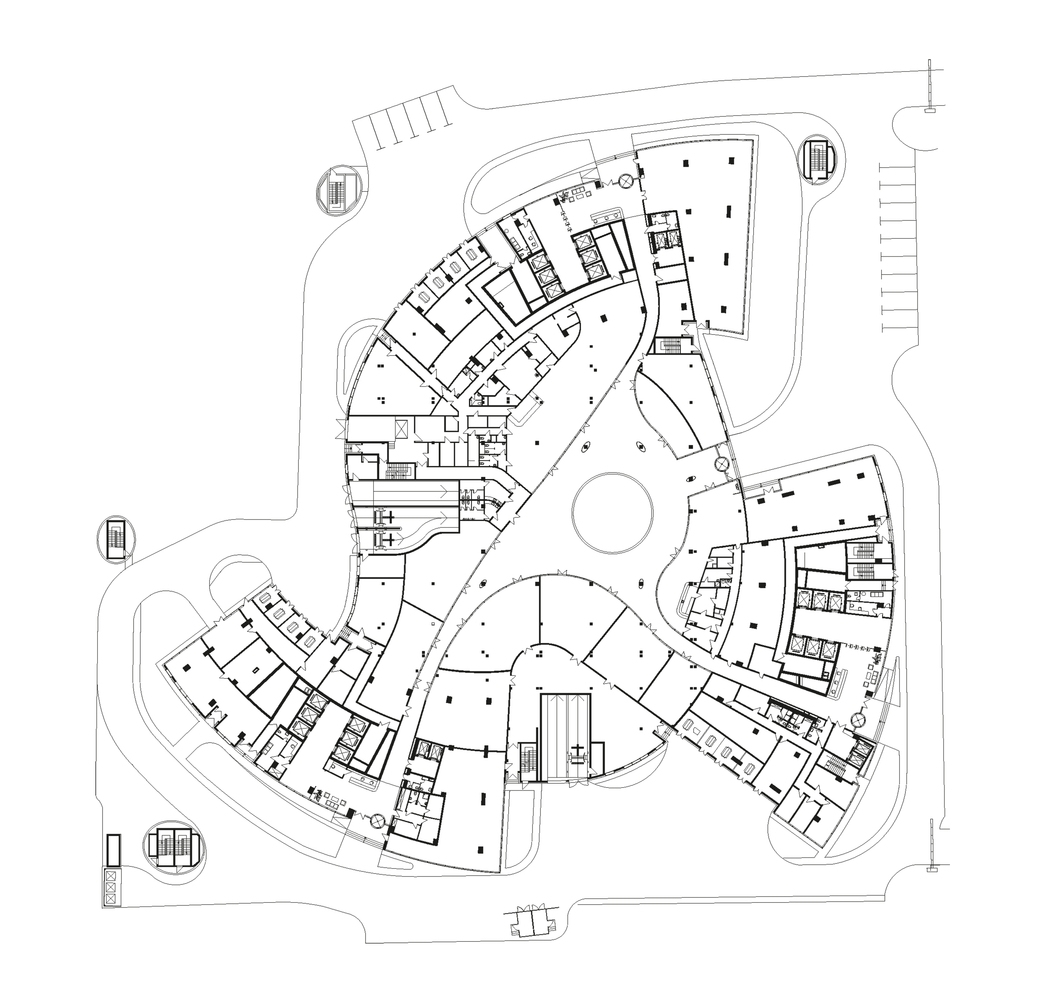 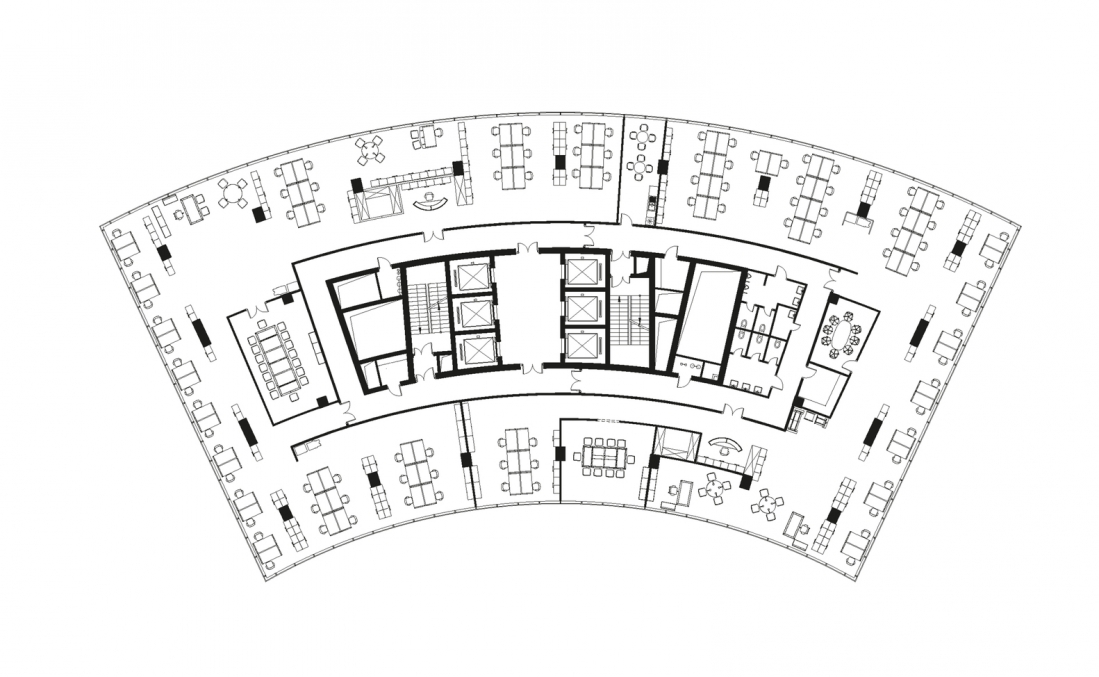 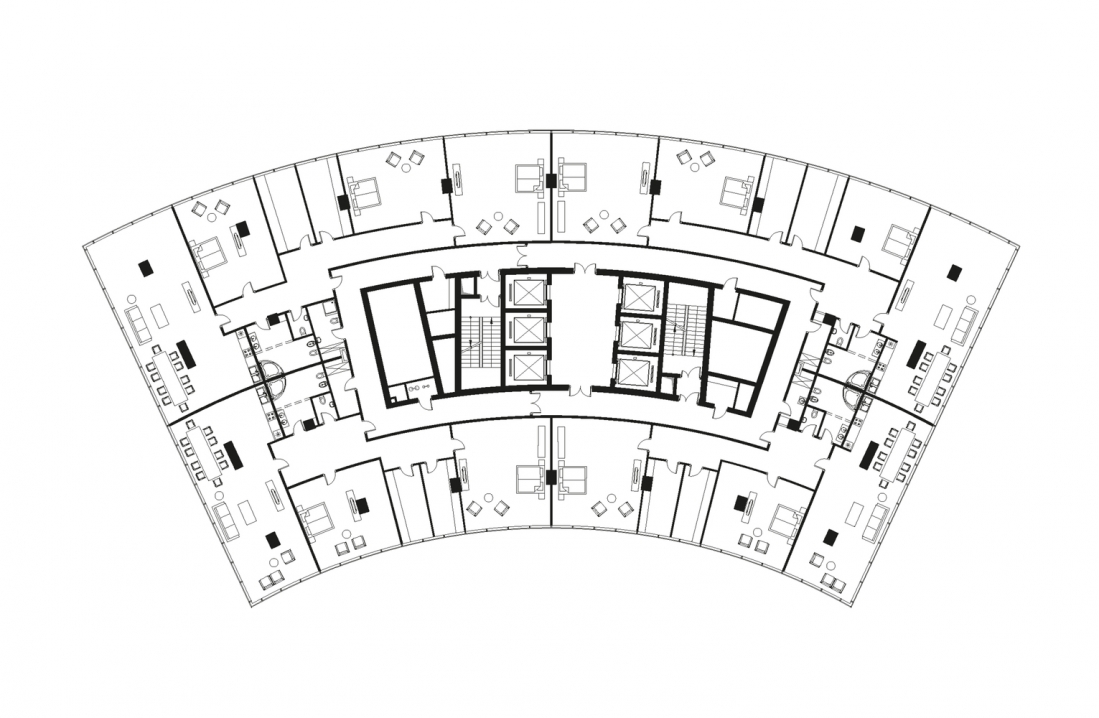 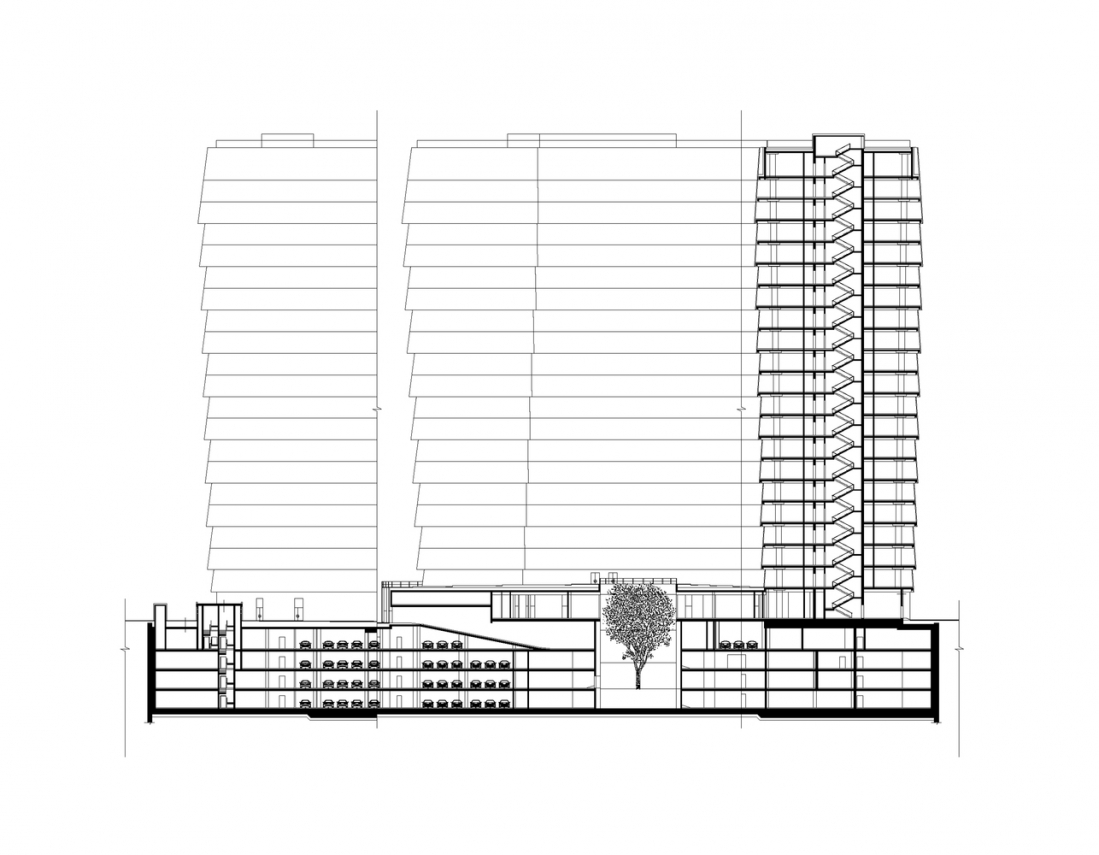 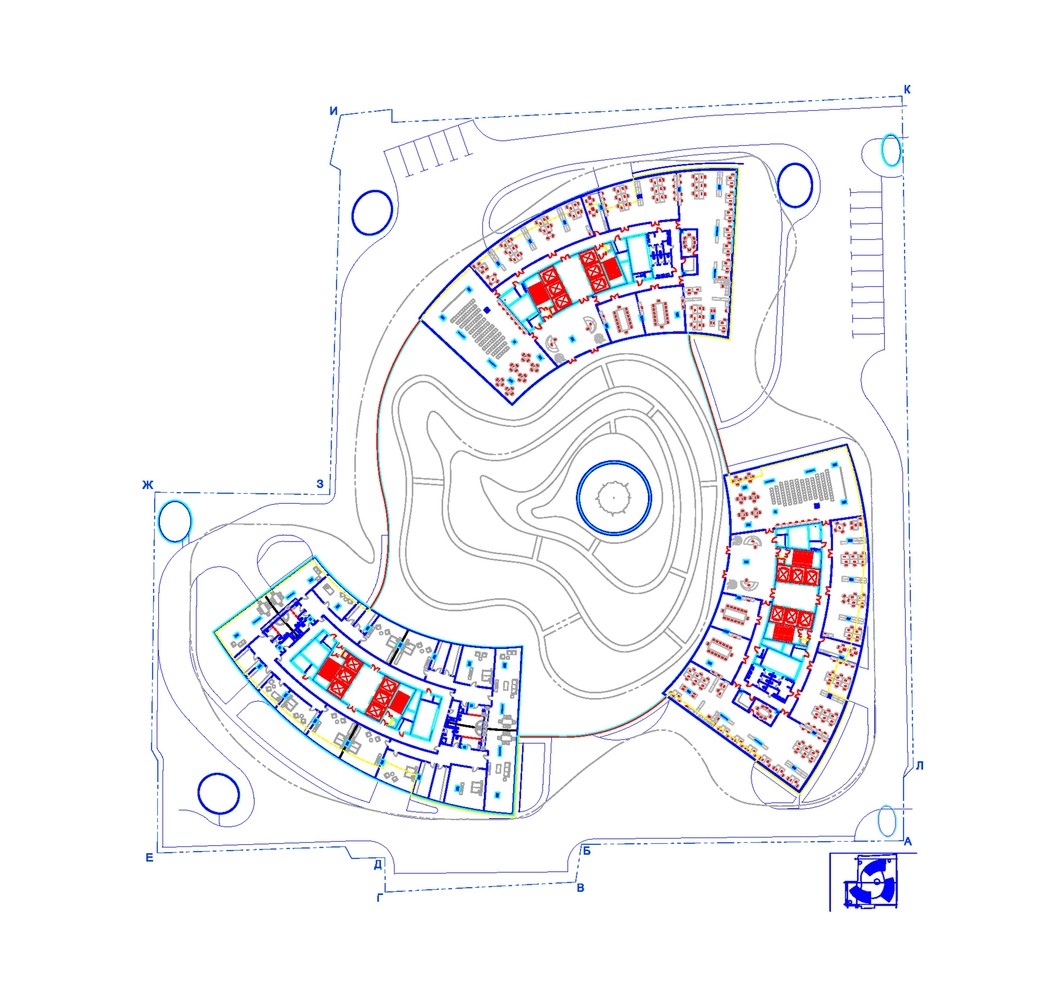 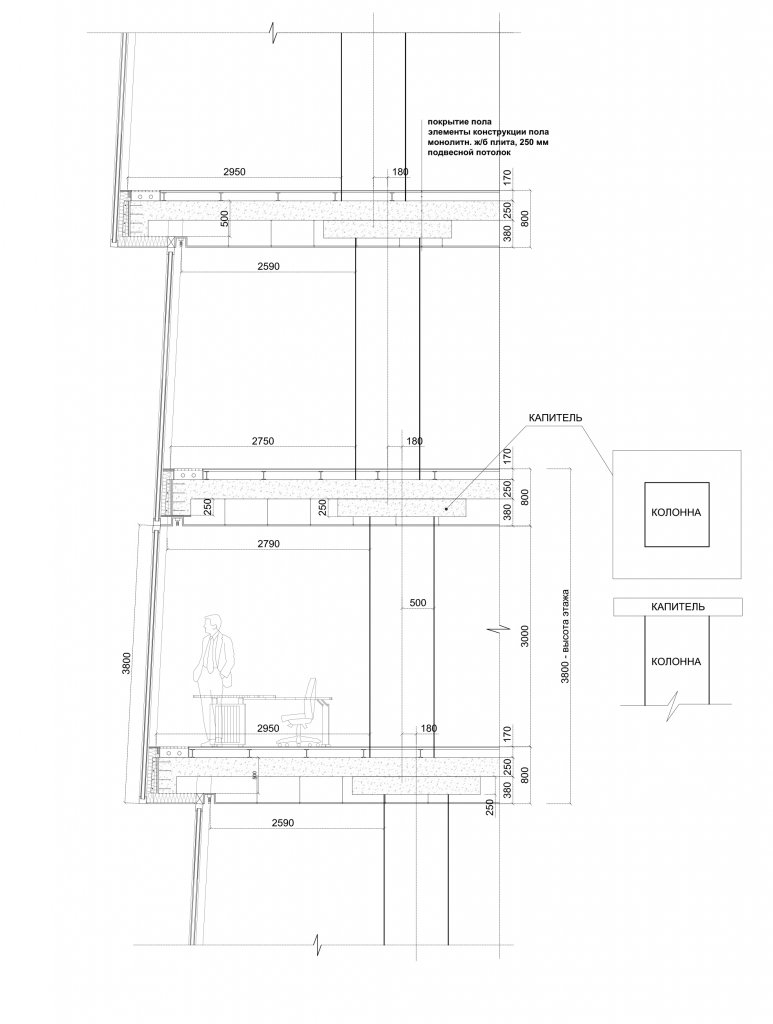 The Lotus Business Center, built on the corner of Odesskaya Street and Nakhimovsky Prospect in Moscow, was nominated for «Building of the year ‘17» by Archdaily.com. The authors of the project are: Sergei Tchoban, Sergey Kuznetsov, Aleksey Iliyn. Project year is 2014.

The building serves as an architectural accent for the entire surrounding area. A five-minute walk from Nakhimovsky Prospect Metro Station, the corner is home to the three 21-story office buildings connected to a shared ground floor housing a shopping center, restaurant and bank. The complex also includes a four-story underground car park.

This architectural design is based on the idea of the complex being an effective sculpture where plastic expressiveness is emphasized by use of modern finishing materials. Glass with a slight mirror effect outlines—like shining armor—the dynamically arched façades.

Each building is trapezoid in shape, the longer sides of which are arched. Like gigantic propeller blades, the buildings twist around the center of the complex, where there is a skylight that allows natural light to enter the connected space and further down through the atrium that goes down the lowest parking level.

Seen together, the buildings comprise a dynamic volumetric and spatial composition that partly resembles a half-opened flower floating on water. It was this association that prompted the client to give this premium-class business center the name Lotus.

The complex’s unique expressiveness and feeling of endless rotation is achieved thanks to the original plastic solution—in addition to its curvature on the horizontal plane, the buildings transform in vertical projection as well. The two unequal shorter sides of the curvilinear trapezoid of each building change their geometry every two floors. A shorter side gets longer, and a longer side gets shorter.

As a result, one side of the building goes forward projecting above the lower floors, and another side goes back. On the façade, this stepped feature is accentuated with façade elements 1.35 meters in width installed at an angle. Glass bands create an innovative façade structure resembling armadillo skin and vary the depth of the protrudent part of floors along the curved sides.

In order to retain the integrity of a glass shell, the number of metal elements visible outside is minimized. Particular attention was given to the corner elements of the glazing. To achieve the purity of perception of the glassy surface, a unique corner glass pane with inside metal structure was introduced.

The final flourish on the complex’s glass shell was the finishing of the upper technical floor with the same glass plates installed in a chessboard manner. They crown the buildings, creating an unstable line between the sky, reflected in a tilted façade, and its true vault.

The transformation of the buildings is reflected in the interior as well. It was necessary to change the traditional design scheme for modern office buildings that includes a central load-bearing stairway with elevators, a row of columns along the perimeter, and beamless solid cast floor slabs—columns were not installed along one and the same axis.

At places where the perimeter changes, the columns go forward or back (maximum movement is 180 mm), thus retaining enough space between them and windows to sustain bearing capacity and maintain open planning. Cantilevers in corners do not exceed 4 meters.

The sculptural quality of the volumetric and spatial composition is achieved due to the triple shape deformation: curvature of the trapezoid sides in plane, changes in width of its ends, and the stepped finishing of the façade. A viewer standing on ground and looking at the complex can barely define a vertical constant and reconstruct a system of perspective deformations.