Future of VDNH through students’ eyes On the 26th of May, the day of opening of the Russian pavilion at the 15th International Architecture Biennale in Venice, there were presented the results of the workshop where the students from different countries introduced their concepts of the VDNH territory development.

An international research seminar was organized for the VDNH Urban Phenomenon project by the Graduate School of Urbanism (National Research University Higher School of Economics) supported by the Institute for Advanced Architecture of Catalonia (IAAC). We want to introduce the works of the participants who were free to express their radical artistic vision of the VDNH future. Irina Shmeleva, graduate of the Strelka Institute for Media, Architecture and Design.

VDNH is a metaphoric scenery, a projection having a symbolic meaning and bearing a comprehensive knowledge of the country. The pavilions of the complex represent an archipelago, the islands scattered along the territory with a totally different spatial organization, architectural look and function. Within VDNH development one should not only expand the range of functions and improve an active dialogue between the archipelago elements, but also to support the structure that unites the islands into one system. In order to meet this requirement it is advised to turn VDNH into university campus. This will attract new audience and bring out new residential, commercial and social functions that will make VDNH the hub of the city’s science and education. 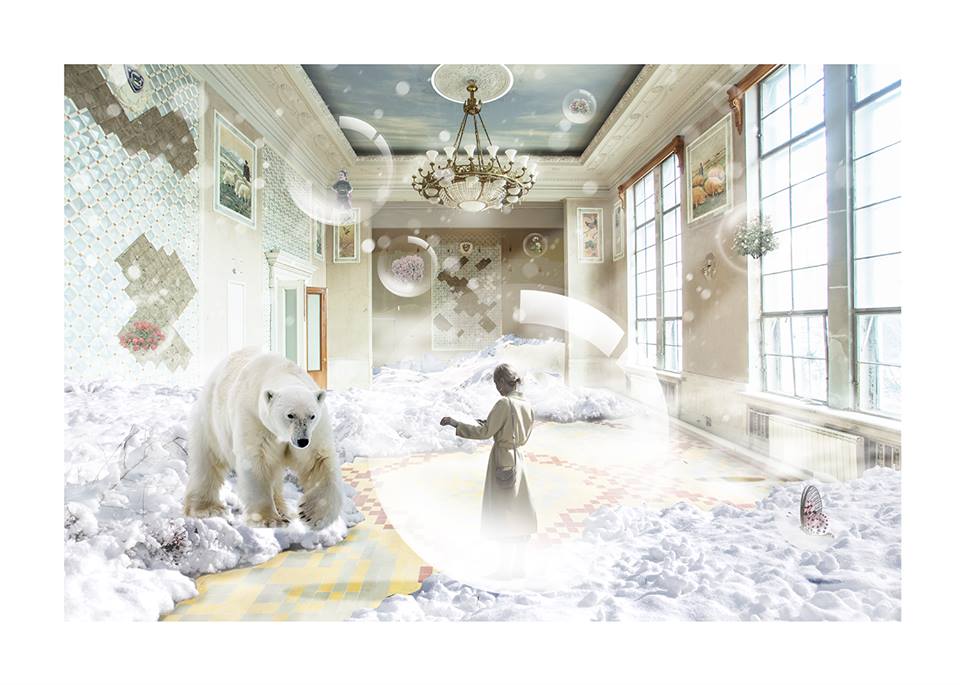 His work represents an alternative vision of the VDNH territory in a distant future. It is the park full of structures floating in the air — the places of rest for the citizens of a congested Moscow. 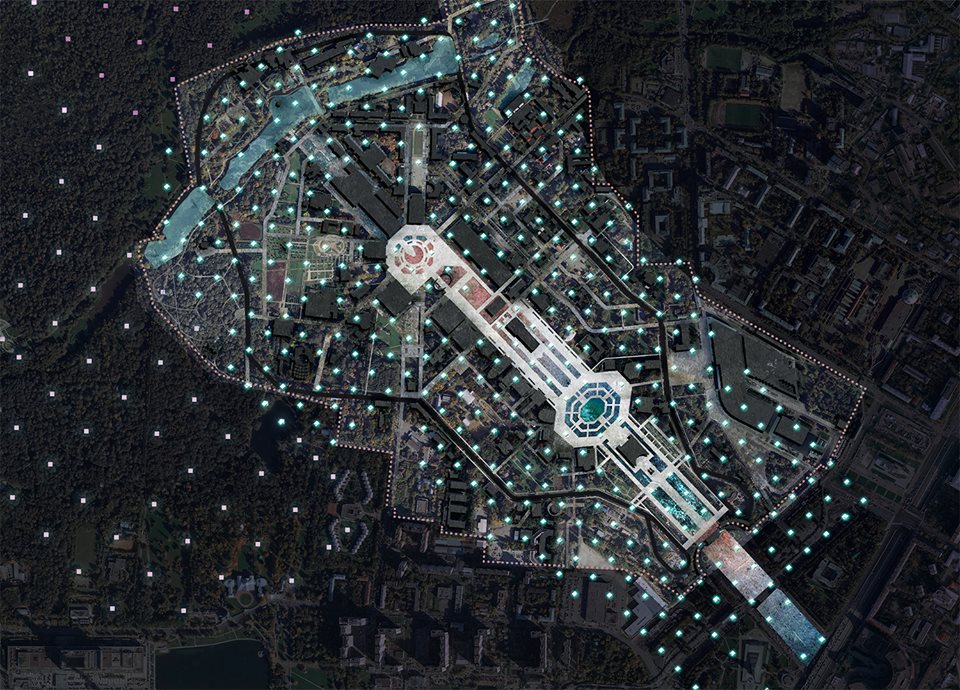 Ekaterina Goncharova, graduate of the Vysokovsky Graduate School of Urbanism.

By 2025 Moscow will have become a new world center of the contemporary art. Like Paris (ART Paris), Beijing (ART Beijing) and Basel (ART Basel) it is a city where an international exhibition ART MOSCOW is held — on the territory of VDNH. An orthogonal grid of the temporary exhibition sites covers the whole park and turns the territory into an integrated exhibition place. Annually, for a few weeks, these exhibition sites and pavilions present the works of the modern artists from all over the world. Other time the territory is an experimental ground for young Russian artists. In the process of making their installations and sculptures they create new representations of an established Soviet ideology of this place. 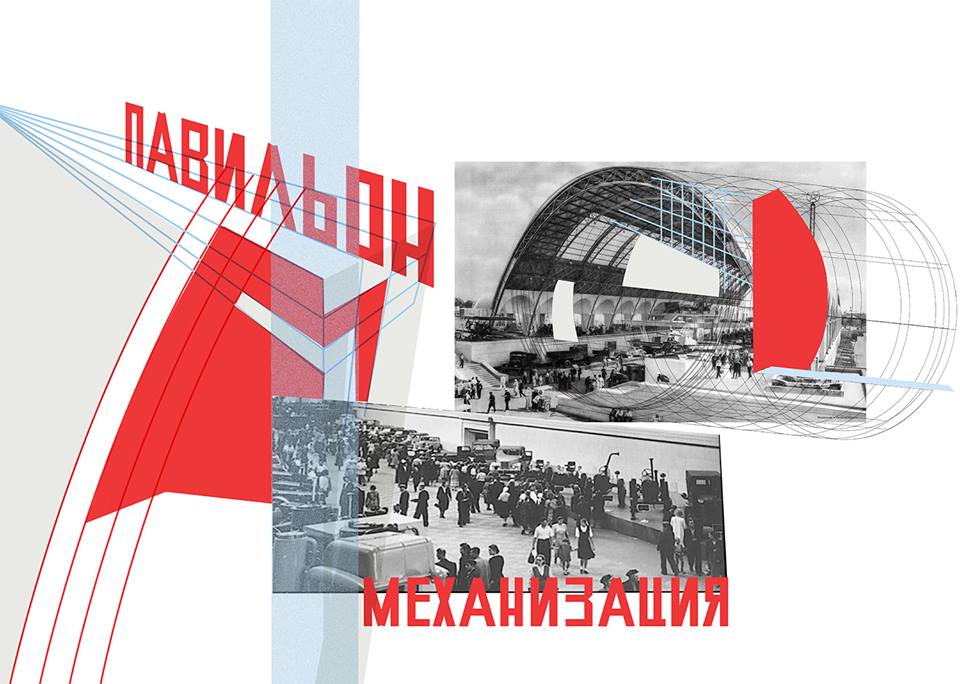 The essence of my project lies in rethinking of VDNH phenomenon from the avant-garde perspective. It is an attempt to present the exterior and interior pavilions of the exhibition complex through the eyes of the artist and architect. I tried to show how the VDNH area could look like if it was arranged by constructivists. 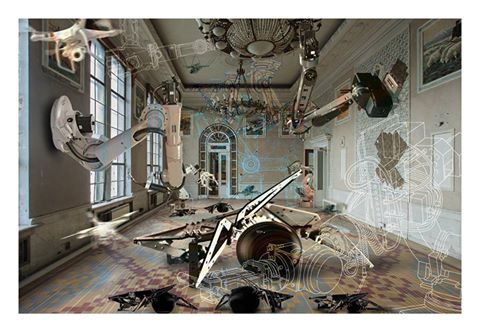 Ruxandra Iancu-Bratosin, a graduate of the IAAC > Institute for Advanced Architecture of Catalonia.

My project deals with the future with no place for a human, where all the remained antiquities are used by machines to make their own future. The idea of my project is to show how the VDNH park will look like after the disaster — the Apocalypse that is to happen in many tens and even hundreds of years. There will be life without humans. Only some animals and birds will survive. Everything will be covered by vegetation, because the nature will be fighting back the territories that had been forcedly occupied by people. The main idea of my work is ecological. 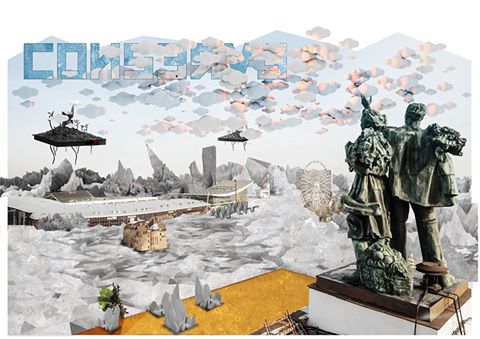 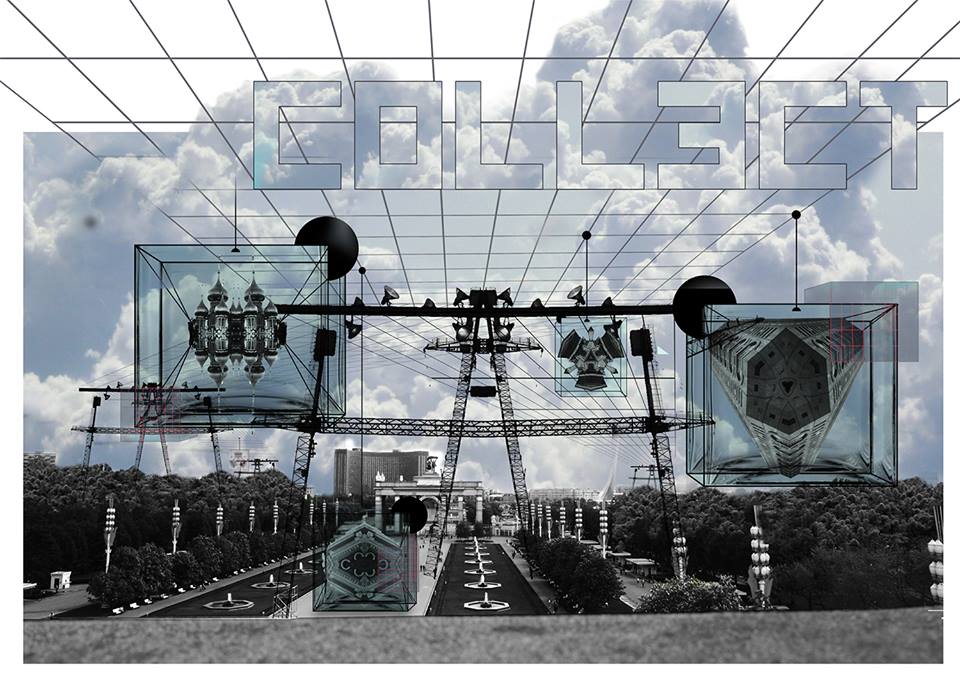 Ece Tankal, a student of the IAAC > Institute for Advanced Architecture of Catalonia.

My understanding of the VDNH radical future is as follows: the exhibition territory is connected with the Moscow city center by means of a slightly raised megastructure. This structure allows to move different objects, including architectural ones, from one place to another. And in future the VDNH territory becomes the place of keeping or «collecting» such objects. 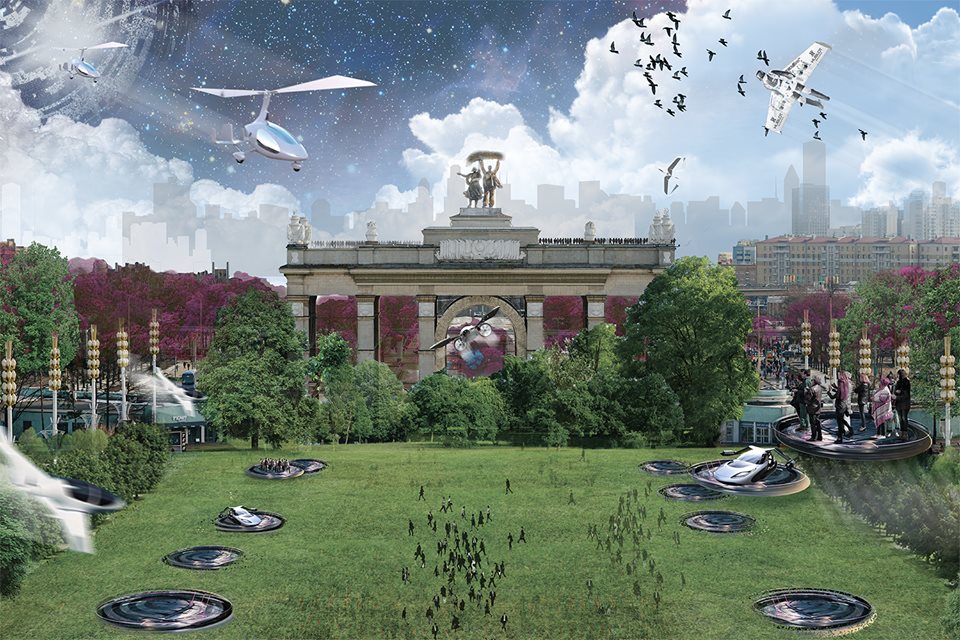 The essence of my work lies in the research of the VDNH pavilions and landscape future provided that the air transport becomes the main transport of the future and the land and underground transport become an amusement for those bored. In my opinion, people as well as the park won’t need large territories paved with asphalt. Lawns and grass will occupy large areas for rest. People will move from the ground to the roofs. Since the roofs of VDNH are amazing. Everything — from restaurants to night open-air theatres — can be incorporated into design. 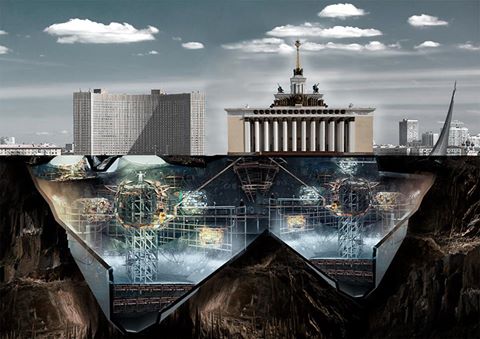 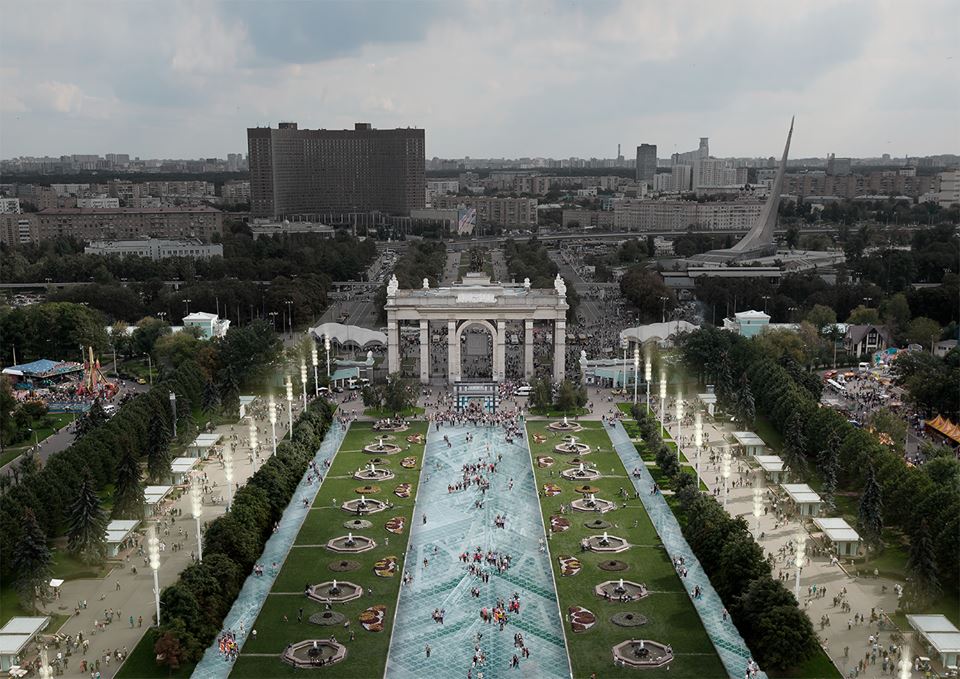 Ksenia Dyusembaeva, a student of the IAAC > Institute for Advanced Architecture of Catalonia.

My works offer a radical solution to a problem of preserving the VDNH heritage. It is necessary to develop the underground production structures to save an architectural sublimity of the exhibition. 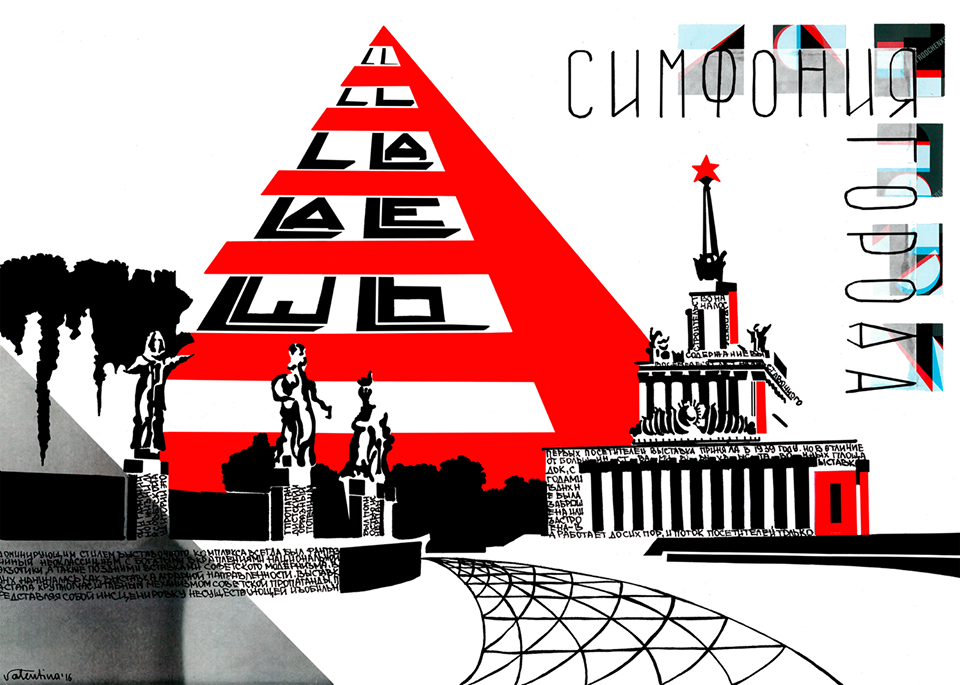 Valentina Maksimova, a student of the Vysokovsky Graduate School of Urbanism.

My radical variant of the future development of VDNH is coming back to simple massive architectural forms. A well known avant-garde style that was popular a century ago will have its second, third life having gone through certain changes. Dimensional geometric figures-constructions, a sphere and a pyramid, their size enlarged in a grotesque way, and painted into the main spectral colors — yellow and red — will create a bright architectural contrast with an existing complex environment that is to continue its existence in the future. A minute complex architecture of VDNH will save its distinctive diversity and beauty due to such a noticeable contrast against almost coarse and primitive avant-garde forms. 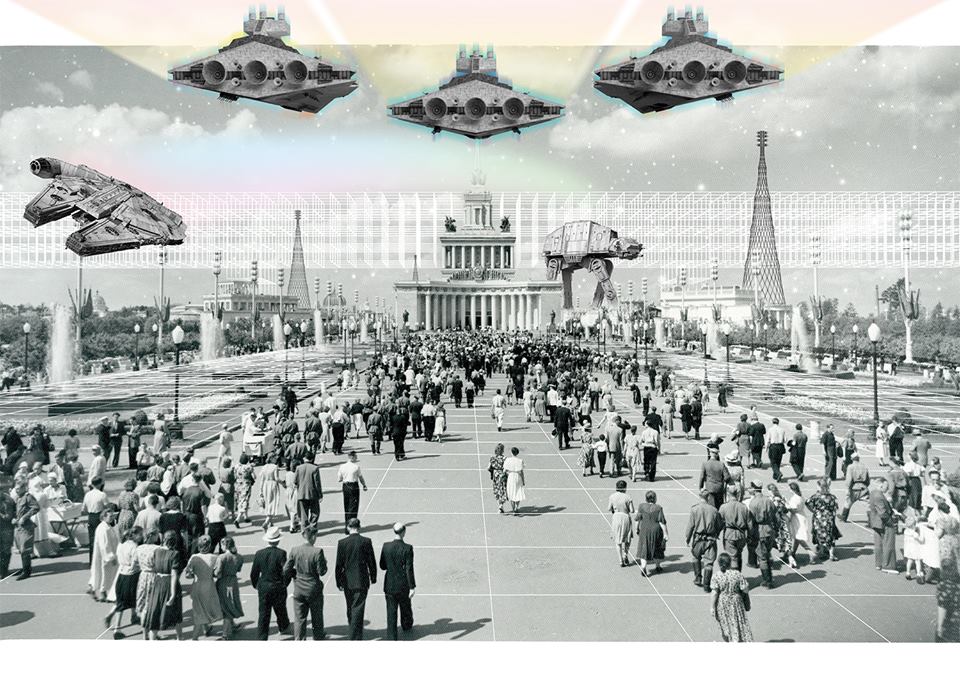 I have always been interested in working with VDNH, because it is a strikingly beautiful and a very complex space that is entrapped in its past and doesn’t keep up with the times. I have made up two speculative collages within a workshop. The topic is the future of VDNH. The first collage describes some alternative retrofuturistic reality, with Star Wars identica, with the world that is sanguine and longing for the stars rather than a war. The second panel is divided into three parts. Unmanned aircrafts races take place at the bottom of the panel. And this is the future that has come today. Then, upwards you can see a distant future, with a flying airborne habitats — Cloud 9 Buckminster Fuller — that keep historical moments of our history.

The concepts and suggestions introduced by the students were presented within an exposition of the Russian Pavilion in Venice. «Our task is to show that the ensemble created in the Soviet time as a powerful propaganda tool, can be popular with a public space even without its former ideological component. The question is in the quality of the functional meaning. In 1990th it was an ordinary chaotic market place, whereas today the Moscow government that took responsibility for VDNH is performing a deliberate functional reprogramming of the exhibition territory. At the suggestion of Moscow mayor — Sergey Sobyanin — a large-scale reconstruction was launched, the park spaces, commerce and services sector, educational programs were given a second thought. A reasonable demand generates a reasonable supply: new cultural, social and educational functions that appeared at the VDNH site are highly popular», — a chief architect and curator of the Russian pavilion — Sergey Kuznetsov — highlighted.